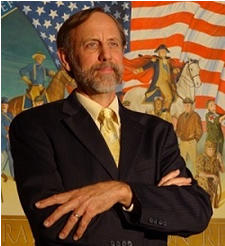 Mosher has served on numerous organization boards, including five years as Historian General of the Naval Order of the United States. He has been honored with many awards, including the Commander General’s medal for saving the archives of the NOUS. He is often sought out for lectures and presentations around the country and was the first Naval Heritage Lecture presenter for the Surface Navy Association at its Annual National Symposium at the Crystal City Hyatt in Alexandria, Virginia, in 2004, and again in 2006 and 2014.

Mosher lives and works in his hand-built castle home and studio in Fairhope, Alabama, which has been featured on HGTV and Absolutely Alabama.

His proudest achievements are winning the hand of his wife of thirty-six years, Pagan, and the raising of their two great children, Megrez Ravel and Cleveland Turner.

Mosher may be reached by email at deanmosherstudio@gmail.com. His works may be viewed at his website, http://www.deanmosher.com/.