Our Founding in 1914. We are one of the very oldest Rotary Clubs in Rotary International but, like all such things, we had a modest start. In the winter and early spring of 1914 Rotary was very new in the United States, only nine years old in fact, but Rotary had begun to grow. Two Mobilians traveled to other states, and came across Rotary Clubs and thought the idea would be good in Mobile.

L.J. (“Lou”) Davis was manager of the Mobile Gas Company, which was owned by a Chicago concern, and on his travels to Chicago Lou visited the parent Chicago Rotary Club and was impressed. About the same time Dr. Seale Harris, an internist, visited the Jacksonville, Florida club while he was visiting there on a medical convention. Each of these men liked the idea of Rotary, and each talked to some of his friends about starting Rotary in Mobile. On May 14, 1914, 34 men met in the Battle House Hotel, in the main dining room, and organized the club; several members of the Birmingham, Alabama Rotary Club attended to give a hand in getting the club going.

Well, ok, so we fudged the classification system from the start. Of that 34, three were lawyers: Palmer Pillans was the admiralty lawyer, Will Armbrecht was the Civil Lawyer, and they brought in lawyer Matt Mahorner as a “Breeder of Blooded Bulls.”

The club tried several approaches in its early months, moving around to new places and such, but shortly it settled down to having lunch in the large room at the southeast corner of the ground floor of the Cawthon Hotel in the middle of downtown Mobile, where it met for so many years that the room became known generally as “The Rotary Room”. During the first year the club for a time dived from the original 34 charter members down to 24 members, but by the end of the first year the club was strong and had 45 members.

First “Ladies’ Night” [Now, considering the full diversity of our membership (including four women presidents so far), the event is called “Rotary Gala”]. One thing the Rotary Club of Mobile has always done is have fun, and they began at the very start. On the evening of June 3, 1915, the Club chartered the large “bayboat” BAY QUEEN, a side-paddle- wheeled steamboat [one of the several boats which made regular runs from Mobile to the resort areas across Mobile Bay, at Point Clear and Battles Wharf]. On that charter trip the Club installed its officers, danced on the top deck to Drago’s Orchestra, and had fun. There were 32 members and 76 guests.

“Ladies’ Night” was so successful that in one form or another it became a fairly regular thing. Often the club would meet at night at the dining room and bring their wives, who typically spoofed the members and the club itself. They certainly deserved to spoof us, for at some point the wives of Rotarians [at least around here] became referred to as “Rotary Anns”, surely an abysmal usage which survived until the 1970s or even the 1980s.

Fun vs. Seriousness. The club started off as a pretty serious outfit; this might be why membership plummeted pretty quickly after our founding. So, early on, the club decided to have a serious meeting monthly, but otherwise, to lighten up a little, and they did have a lot of fun from the very start of the club. Practical jokes of various kinds were a big deal.

An early member who was a serious leader but who also seems to have been an instigator of fun was George Dent Lining [pronounced “Linning”]. George was married to Ellen Marston, and though they had no children they had a great time, and George brought fun to Rotary. George, who was president in 1921-22, joked that he had come into Mobile riding the brake beam of a railroad freight car, and rose to become President of Rotary and of the Chamber of Commerce. George called his administration “the rough-neck administration”, but George Lining brought fun to the Rotary Club of Mobile. George has no descendants to keep his memory alive, but he is remembered today at the Rotary Club of Mobile, and he had as much to do with bringing us into our Golden Age as anybody.

The 1919 Barbecue. On Thursday, November 13, 1919 the club met for lunch at the Country Club of Mobile, in the lovely shingled building which later burned, sad to say. Here’s the official photo of the event, taken by our member Eric Overbey and available in the USA Photo Archives]: 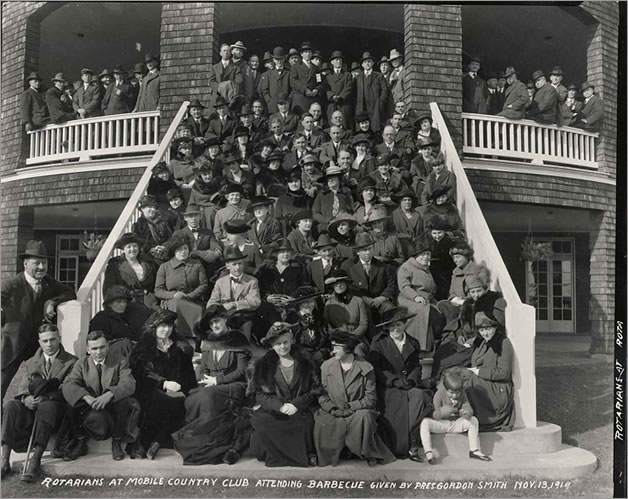 The minutes of that meeting tell the story:

Today’s luncheon was held at the Country Club where President Gordon Smith was host. A most sumptuous barbecue was the principal event. In addition to the membership of the club, the ladies were present as well as a number of specially invited guests. After the luncheon there were sports of various kinds and dancing in the club building. Quite a number remained for the afternoon.

* If you can identify any of these people-especially the little girl on the front row in white hose- please help us out. We have a few identified, but hope to get them all [the old guy on the banister on the top left, for instance, is architect George Rogers].

The 1920 Baseball Luncheon. On June 24, 1920, just before George Lining went in as President, he arranged for a baseball luncheon meeting of the Club, at the Marston Tea Room in Spring Hill, in the 1829 Collins-Marston home, now 56 Oakland Avenue in Spring Hill [now the home of Richard Stimpson], which was run by Misses Blossom and Mamie Marston, the two spinster sisters of Mrs. George Dent Lining [Ellen Marston], wife of the incoming President. Here is the official photograph, once again by our member Eric Overbey, and now compliments of the USA Photo Archives where his photos are now preserved: 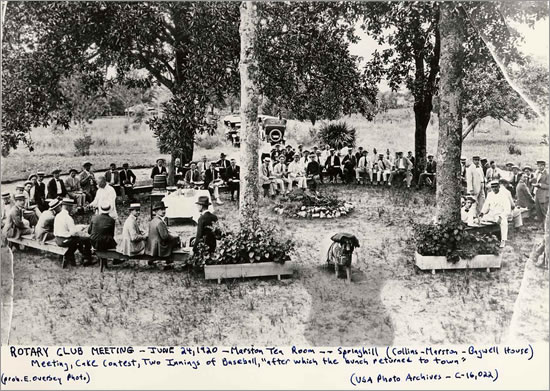 The minutes of that meeting show that 60 members attended and brought ten guests, and that 11 members- about a seventh of the membership- were at the Atlantic City Conference of Rotary:

The regular luncheon of the week was held at the Marston Tea Room at Spring Hill, the lunch being served on the lawn. 1st Vice President George Lining presiding. Telegrams were read from Bill Reynalds, Oliver Fowlkes, Ed Bailey, John McMahon, Hervey Patterson, John Harvey, Jerry Sheip, and Julius Wright, all of whom were in attendance at the International convention of Rotary at Atlantic City. From the tone of the messages, they were having “one big time”. A cake contest was indulged in; also a two inning ball game after which the bunch returned to town.

The Mobile Rotary Club in the 1920s adopted as one of its major activities the responsibility to provide better care for the physically handicapped children of this area. No record of this early period would be complete without paying high tribute to George Lining, the Secretary of the Mobile Club. His great interest, his abiding faith in the ultimate success of the program, his keen wit, along with his unusual capacity for drawing to himself a wide circle of friends willing to work, laid the foundation on which has grown a monumental structure, participated in by many.

Our official history was written by our beloved member Sam Brown in 1956, and updated by him in 1986. We cannot think of our history without thinking of Sam. And, even though Sam Brown was justly crediting George Lining for this effort, we also cannot think of the Crippled Children’s efforts of the club without thinking of Sam Brown and his father Milton Brown. Nobody did more for the Rotary efforts for Crippled Children than Milton and Sam Brown. Not even George Dent Lining.

In July of 1931 negotiations began between the Mobile Rotary Club and the Mobile Infirmary Association, looking to start a specific facility for the care of crippled children. We’re blessed today not to have many “crippled children”, but owing to polio and birth defects and injury and dietary disorders back then, there were lots of them, and not enough people to care for them.

This resulted, with Rotary’s help, in a special ward at the Mobile Infirmary for children and, especially, crippled children. By 1941 the ante had been upped, and Rotary raised enough money [$25,000] for a new crippled children’s ward.

We don’t want to brag, but for as long as there were numbers of crippled children in Mobile, Rotary was there to help.

But, this web site is not a museum, and it is not a feast for self-congratulation; this was just to give you a flavor of our history. If you want to know more, check with us and let us know, and we’ll try to help. We’re happy to let you look at our published history, or try to help any way we can.