Call to Order:  The meeting was called to order at 12:15 PM by club president Ken Robinson.  Earl Jackson offered the invocation and Tom Martenstein led the club in song and the Pledge of Allegiance.  Guests of members and visiting Rotarians were introduced by Tom Martenstein.

Announcement:  Ken Robinson reminded members who have joined since July of 2014 to email a photo of themselves to Peggy for the upcoming Roster, ASAP.

Art Forward introduced Pam Patterson, executive director of Distinguished Young Women. Mrs. Patterson opened by recalling her childhood interest in the Junior Miss Program and said that when she and her husband moved to Mobile they became host parents and active volunteers.  Following her retirement as a Mobile County public school teacher, she has become the program’s director.

She said that in 2014 some 10,000 volunteers and 4,000 young women participated nationwide in the program.  Since its inception in 1958, there have been 740,000 participants and $102 million in college scholarships awarded, she added.

Mrs. Patterson discussed the $2 million economic impact the program has for Mobile including hotel rooms for families from all 50 states.  Many of the young women end up accepting scholarships at the University of South Alabama or Spring Hill College and stay in the area after graduation, she said.

The program is attempting to reach out to the community with a variety of out-reach programs ranging from public school students to seniors living in Central Plaza Towers.   Baldwin County is an important component in the program and an informal event is planned at the Grand Hotel, she said.

Mrs. Patterson said DYW is always seeking host families as well as sponsors for this year’s first Mayor’s Leadership Breakfast to be held at the Admiral Semmes Hotel.

Ken Robinson thanked Mrs. Patterson for speaking to the club and presented her with a certificate noting that a donation in her honor has been made to the Bellingrath Gardens and Home Foundation.

Adjournment:  The meeting adjourned at 12:55 PM. 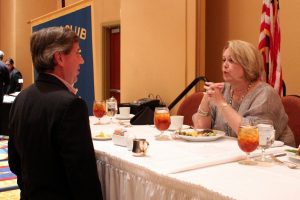 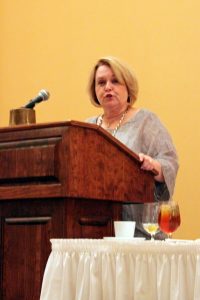