Minutes of the Rotary Meeting
April 23, 2015
By Erin Kinney

Call to Order: The meeting was called to order by club president Ken Robinson at 12:15 p.m. Douglas Kearley offered the invocation followed by the song led by Tommy Blankenship accompanied by Les Greer on the piano. Tom Martenstein welcomed visiting Rotarians and members’ guests.

Announcements: There is a fellowship event May 7. Three is a sign-up sheet with Peggy.

Program: The day’s program was Garrett Williamson, president of Personal Edge Fitness, on the Save-A-Stray Program. Garrett started the program off by introducing his foster failure, Sam, a flat coated retriever. Sam was found under a house in Pritchard. The Battle House is a pet friendly hotel. Save-A-Stray is a nonprofit that enriches the of shelters pets by finding them permanent homes. 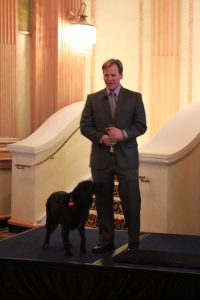 Garrett highlighted the story of Lola, a nine week old long haired dachshund who was thrown out of a third story window by her owner. The story garnered world-wide attention, resulting in over 200 adoption applications. The former owner was sentenced to 90 days in jail and a fine of $2,300. Lola was adopted by a family that travels between Key West, Virginia Beach, and Georgia.

There are too many homeless pets and not enough homes. In 2012, over 11,000 pets needed new homes. Save-A-Stray works with Helping Hounds in DeWitt, NY, a suburb of Syracuse. Save-A-Stray readies and transports 18-25 dogs at a time. The partnership has lasted over 3 years with over 1140 dogs being placed in homes. Save-A-Stray provides veterinary care through three vets, and has sponsorships with B&B Pet and Nutro for supplies and food. Save-A-Stray also partners for cat adoption. Spay Day had four vets and 159 animals altered this year.

There are transport standards, such as the animal being located out of the shelter for 2 weeks with a family, medical checks with age appropriate vaccinations, two dewormings, heartworm testing, heartworm and flea prevention, healthcare, a microchip, and if necessary, spay/neuter. The number of foster homes dictates how many animals they can transport. Foster families can request their preference of size, gender, age, etc. Save-A-Stray covers vet costs, provides a family experience, and photos. Foster failures do happen, but are not encouraged.

Garrett concluded the program by bringing in a dozen fosters with their dogs. These dogs will be on the next transport to New York, driven by the supervisor of the Saraland Animal Shelter, Crystal Beatty, and her husband Mike, in a specially designed trailer. 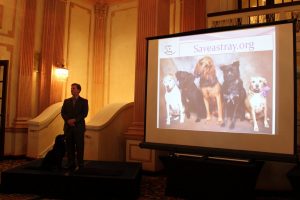